Monitoring of the socio-economic impact of the project (SROI methodology)

The guidelines for applicants 2014 (LIFE Environment and Resource Efficiency branch) which applied to the first call for LIFE project proposals ("LIFE 2014") included a series of obligatory requirements in relation to the evaluation of the impact of the project’s results.

Among the mandatory requirements the call included that “All projects shall include separate impact monitoring action(s) to measure and document the effectiveness of the project actions as compared to the initial situation, objectives and expected results […].

[…] An assessment of the socio-economic impact of the project actions on the local economy and population is also obligatory and shall be included as a separate action. This can take the form of a study consolidating the data and results over the project lifetime, to be delivered with the Final Report”

Taking into account this mandatory requirement, when preparing the proposal, it was studied which could be the best way to issue this point regarding the project itself and its objectives.

After checking different possibilities, it was thought to take, basically, into account

a) Opinion of the European Economic and Social Committee on social impact measurement (own-initiative opinion) - (2014/C 170/03).

Which in its item 6.2 establishes that one of “The best-known methods are social return on investment (SROI), which is an outcome-based concept designed to show an organization’s social, environmental and economic value creation, and social accounting, which is a method for planning, measuring and evaluating the social goals of an organization…”.

This document is included as annex together with this report.

b) Social Return on Investment: a new way to measure FLAG results (https://webgate.ec.europa.eu/fpfis/cms/farnet/social-return-investment-new-way-measure-flag-results)

The site recommends, also, that for further references on SROI refer to http://socialvalueuk.org/what-is-sroi/the-sroi-guide

Developed by the New Economics Foundation which explains that

“…The SROI is essentially a framework developed from social accounting and more traditional cost-benefit approaches for understanding the effectiveness of public expenditure. The basic calculation is to determine the benefits to society as a whole (i.e. the ‘social’ return) from the investment of a sum of money by dividing the value of the benefits by the total amount invested:

Specific valuation measures are then applied to the indicators, and calculations made to subtract any deadweight (activity that would have occurred in the absence of the programme), activity that can be attributed to other programmes, or displacement of existing activity, in order to arrive at the value of the return on investment. A final stage may involve discounting future expected “outcomes” over a defined period of time in order to provide present value estimates of the “outcomes” …”

This document is included as annex together with this report.

II. The LIFE_FERTILIFE project aims to develop a prototype in which CO2 emissions of an industrial facility are captured and the resulting carbonated water is used to irrigate citrus field crops.

Taking into account the references mentioned above and the SROI methodology, to evaluate, and establish, the SROI of the project, the final document will be based on the results of the project in relation to the modification of the irrigation system for applying pesticides and their impacts, at the project area, for the fruit production and the environment, as well as the dissemination actions with respect to the “stakeholders” and their impact on the affected population as defined in the approved proposal; also the social perception and economic impact of the project that will generate in the coming years the implementation of a new irrigation system as a result of the LIFE_FERTILIFE project will be evaluated. 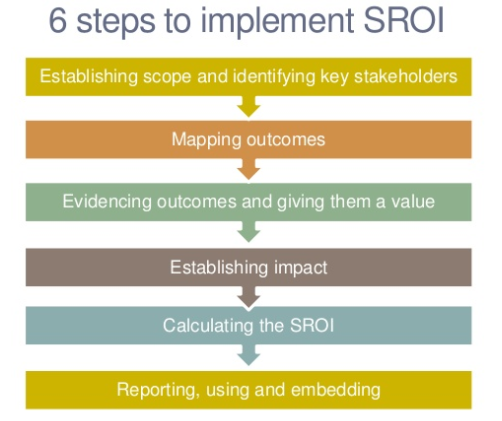